Please be aware that this website uses cookies, which collect data on website visits. The data is anonymous and helps us to improve the usability of the site and the user experience. By continuing to use this site, you agree that we will use cookies on your device. Find out more

When you look at Lithuania on the map, you see this tiny blot. Many would believe it should be massively cramped and tight. The truth is, over 65,300 square kilometres is home to just under three million people, making it one of the least densely populated countries in the world. This is what we offer to all our visitors, who quickly come to realise this strange yet pleasing duality: the country is very compact which makes wasting time a thing of the past, and yet when you get where you want to get, you have the place all for yourself. This is true everywhere: even in the Old Town of our capital, Vilnius, you can find empty streets in the middle of the day if you just walk a few hundred yards off the main tourist track. Get out of town, and the feeling starts multiplying and expanding, like ripples in a lake. Lakeside country houses offer the incredible sensation of owning larger space around you than you ever experienced before in your life, real or imaginary. Farm buildings, fields and meadows, little brooks just outside of an old sauna building, and this is all yours.

is a city of many faces, of many names, of mysteries and contradictions. The medieval Germans called it wilde, whereas the Jews of the world recall it as the Northern Jerusalem, and we ourselves would sometimes like to call it the Athens of the North. Some are surprised to find this gem of the Italian Baroque, the UNESCO World Heritage Site, in such a remote corner of the Europe, but in fact it is less than 20 kilometres from the geographic centre of Europe.

Historically it has consisted of four quarters – Catholic Lithuanian and Polish, Protestant German, Jewish and Orthodox Russian. There are so many cultures and national influences entangled and though today Vilnius is very much Lithuanian, but at the same time it is like a miniature Europe in one town. You are not convinced? Come and discover it yourselves.

And you might find Vilnius very Catholic, Lithuanian and Polish, since it is the city of Saint Casimir, with the annual fair of the patron saint, with verbas, relics, the miraculous image of Our Lady of the Dawn Gates, Italian Baroque and, of course, with the famous Vilnius University, founded by the Jesuit Order and counting among its alumni two classics of world poetry – Adam Mickiewicz and the Nobelist Czesław Miłosz.

Or it might appear very German – orderly, clean, with outdoor taverns in Town Hall square, the German street and at the feet of the beautiful churches in “Vilnius’ Baroque style’ by Austrian Johann Christoph Glaubitz which often house magnificent classical concerts. The city has old musical traditions and was the home of the Ludwig van Beethoven’s muse Christine Gerhardi Frank, thought to be the mysterious “immortal beloved”, the home of Mikalojus Konstantinas Čiurlionis and the scene of discovery of the prodigy Jascha Heifetz. Today, Lithuanian classical musicians and vocalists perform on the world famous stages.

Perhaps you will trace the Jewish past of Vilnius – it is a city of the Gaon of Vilna, one of the world’s greatest thinkers and theologists, a city important to the Jewry of the Central Europe from the 14th century, a city, who, through expatriate descendants gave many famous people to the world. And many works of art – from Romain Gary‘s La Promesse de l‘aube, to paintings by Marc Chagall and Chaim Soutine.

If you will visit in snowy winter, the city could look slavonic – with Orthodox churches and their domes, with fur-clad pedestrians. Many prominent Russians, such as painter Mstislav Dobuzhinsky, poet Joseph Brodsky, composer Rodion Shchedrin, fell in love with Vilnius for its familiarity and Western otherness.

We have promised – the picturesque Vilnius is a city of many faces, many names and curiosities. 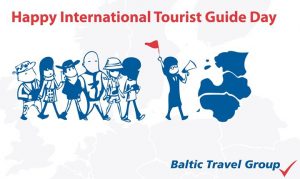 Today is another chance to say thank you for the amazing job you are doing. Have a joyful day!✨ 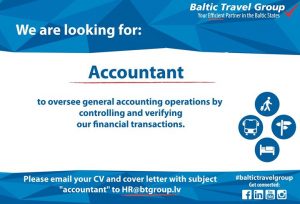 We are looking for: Accountant to oversee general accounting operations by controlling and verifying…

We are looking for: Accountant to oversee general accounting operations by controlling and verifying our financial transactions. Please email your CV and cover letter with subject “accountant” to HR@btgroup.lv More information about this position you can find in our webpage: https://www.baltic.travel/company/vacancies/

If you want to meet us, fill free to fill the form and we will contact you